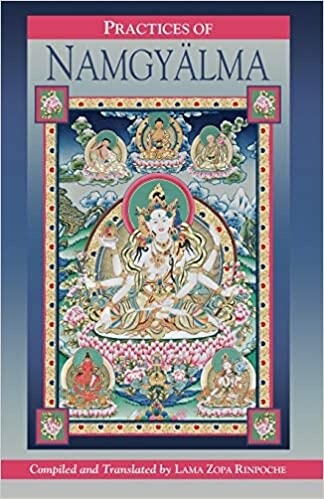 FPMT Namgyalma Pracices
This practice requires the student to have permission/empowerment received from a qualified master in order to engage in the self-generation of the deity. However, it is permitted to do this practice without such an empowerment as long as you do not generate yourself as the deity. Instead, you should generate the deity at the crown of your head or in front of you instead of self-generation.

The practice of Namgyälma removes obstacles to long life and brings powerful purification for all sentient beings. Even just reciting the Namgyälma mantra brings unimaginable benefit. Namgyälma pujas and practice help those with very severe disease.

This book contains the Pari Shodani Maha Batsaya Nama Dharani (The Mother of the Supreme Crown Pinnacle, Victorious in All Aspects, Completely Purifying All the Bad Migrations), which was translated by Lama Zopa Rinpoche and describes the origins, benefits, and practice of Namgyälma. Also included is the Namgyälma sadhana as well as a short teaching from Rinpoche on the benefits of practicing this deity.

"There is unbelievable benefit in the practice of Namgyälma. I have translated completely the benefits of Namgyälma and the story of how the Namgyälma deity happened. It is very good if you are able to read the story and the benefits. Reciting this text is very,very powerful for purification." - Lama Zopa Rinpoche